"Take stock of the company you keep"

An exposé by Network in Vegas uncovered shocking political activity by Joey Gilbert, the attorney who illegally doped up before boxing matches, cheats his clients, brings frivolous lawsuits, and is now attempting to wrest control of America’s Frontline Doctors (AFLDS), despite having no medical experience, from its founder after orchestrating a staged embezzlement.

Joey Gilbert’s campaign is built around the whole Freedom of Choice and MAGA mantras; unfortunately, we’ve found some troubling contributions that seem to conflict with his campaign message.

While Gilbert makes ads denouncing Communism and Socialism, it didn’t stop him from donating to [a] democrat socialist and one of the people who voted for the mask mandate, Clark County Commissioner Richard “Tick” Segerblom.

Gilbert’s questionable contribution to Segerblom may be viewed on Nevada’s public website. 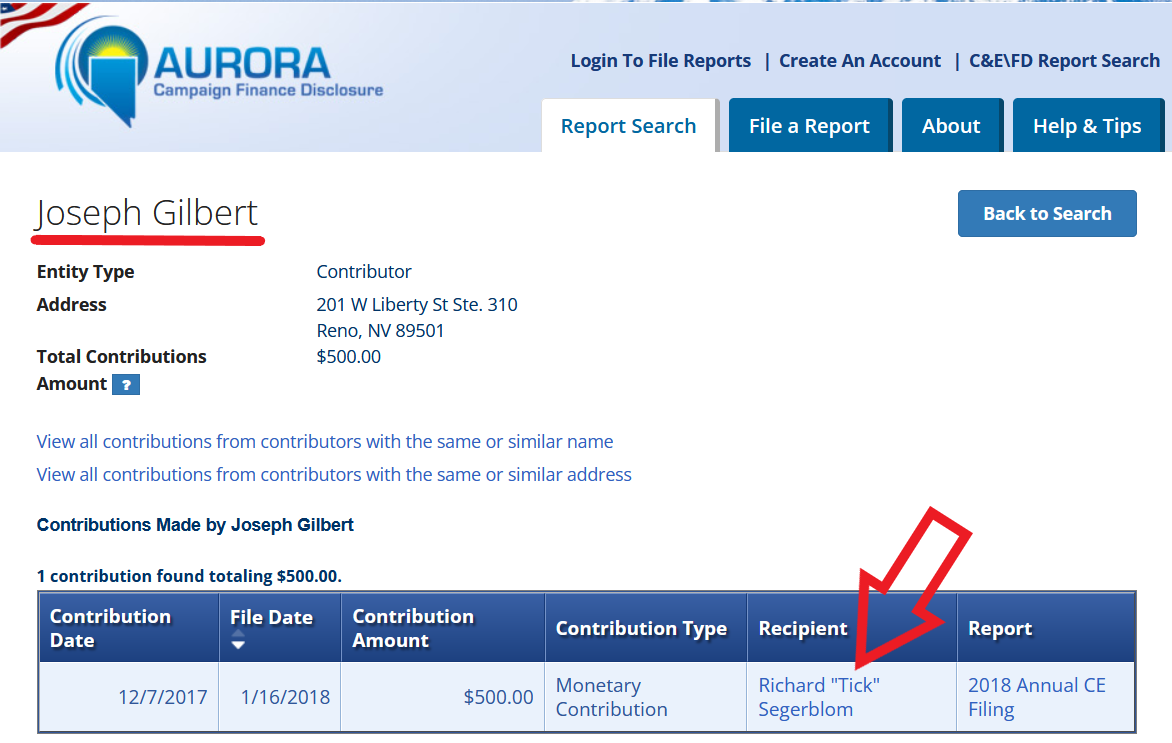 Clark County Commissioner Tick Segerblom who pushed the mask mandate and called for mandatory vaccinations to work in Clark County threw a HUGE pub crawl birthday party where no one had to wear masks...@tsegerblom @ClarkCountyNV WTF???https://t.co/tL0DQW7rNg

One journalist pointed to Segerblom’s substance abuse as pictures emerged of the maskless politician at alcohol driven venues.

If Tick Segerblom & the democrats who push the mandates don’t follow them, why are you? pic.twitter.com/PraWVd6mH7

An investigation by the Washington Free Beacon found that Segerblom doesn’t only support big government in health care. The state legislator turned commissioner is an outspoken socialist.

[Segerblom] is an unabashed socialist. Las Vegas's Democratic Socialists of America chapter—which counts Segerblom as a member—has referred to the local official as "Comrade Commissioner" and touted his status as "one of the strongest progressive voices in Nevada and a well-loved member of our chapter." Segerblom, meanwhile, has said he's "not keeping quiet" until he gets "socialism," called Nevada a "democratic socialist state," and said he wants to see "a socialist in the White House."

Gilbert wasn’t a mere behind the scenes supporter of Democrats. He actually hosted a fundraiser for Democrats, one of whom was a convicted criminal running for attorney general despite an arrest for forcing his way into an ex-girlfriend’s apartment.

No wonder @joeygilbertinc purged his old twitter posts -- guess on top of fighting for Asylum seekers and donating to Socialists and the Criminal Aaron Ford, Joey Gilbert was throwing campaign donation fundraisers for democrats as well -- OOOPS!!!https://t.co/1R8Xfj6tcR pic.twitter.com/odMwbumRiL

When confronted with the exposé revealing his financial support of socialists, criminals and other Democrats behind vaccine and mask mandates, Gilbert purged his old tweets and essentially replied that it was a mistake but necessary.

I know you may be surprised to see that I’ve donated to several campaigns & issues that may be concerning. I understand. I honestly believed I needed to donate to the Dems because I knew they were influential. Clearly you guys wish I had not; I promise it will not happen again.

Joey Gilbert has been donating to Radical convicted Criminal Aaron Ford for years! These people are all FRAUDS!!!!

Twitter users asked Gilbert whether he was admitting to trying to bribe Democrats, by saying he wanted to influence them, and telling him to drop the excuses.

Another accused Gilbert of being an opportunist.

You ride the fence. You do not appear capable of making solid decisions.

Again, big thank you to @Networkinvegas for true journalism and exposing the truth.

Gilbert then attacked the journalist behind the exposé claiming, without any evidence, that the journalist may be someone who is actually working for liberals. He then tried to excuse his past by claiming to have been surprised that the Democrats he supported turned out to be Leftists.

I don’t know what else I can explain to you other than we had no idea these people would act like this 3-5 years ago respectively. They are traitors to our constitution, way of life & I’ve been fighting them every day for two years. Never should have given a penny.

I don’t know what else I can explain to you other than we had no idea these people would act like this 3-5 years ago respectively. They are traitors to our constitution, way of life & I’ve been fighting them every day for two years. Never should have given a penny.

Read our previous articles on Gilbert’s schemes and reprimands, including cheating in professional boxing matches, setting up a fake embezzlement claim in AFLDS, improperly charging legal clients and being sanctioned for a frivolous lawsuit:

Also be sure to check back as we continue our series on Gilbert and try to answer the following questions: