Michel Goldman, a Belgian immunologist and the head of a university hub researching new drug designs, suffered months worth of cancer spread in just 3 weeks. Having a brother who heads nuclear medicine at a major Brussels hospital, Goldman was able to have CT scans of his body done a mere 22 days apart.

The Atlantic reported that he requested the second scan because his pre-existing lymphoma got much worse just days after taking his third dose of the Pfizer mRNA injection.

His night sweats got much more intense, and he found himself—quite out of character—taking afternoon naps. Most worryingly, his lymph nodes were even more swollen than before.

The latter scan took place just 8 days after he took the COVID shot in September 2021 and showed (in black in the image) a very rapid spread of his pre-existing lymphoma. 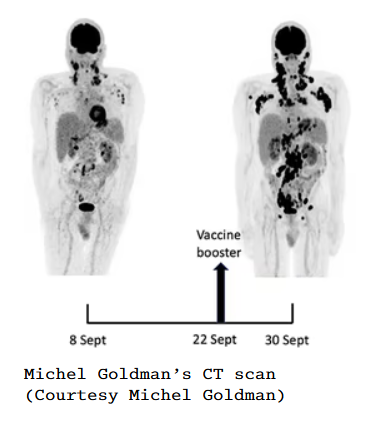 The pictures showed a brand-new barrage of cancer lesions—so many spots that it looked like someone had set off fireworks inside Michel’s body. More than that, the lesions were now prominent on both sides of the body, with new clusters blooming in Michel’s right armpit in particular, and along the right side of his neck … Michel’s hematologist saw the scan, she told him to report directly to the nearest hospital pharmacy. He’d have to start on steroid pills right away, she told him. Such a swift progression for lymphoma in just three weeks was highly unusual. [Emphasis added].

Naturally, as one of Europe’s leading medical researchers, Goldman began researching a possible connection between the jab and his “highly unusual” cancer spread. And he was successful, finding a mechanism by which the jabs caused cancer:

He learned that body scans of some of those who get vaccines, including cancer patients, have shown heightened activity in the lymph nodes near the armpit on the side where the shot was received. He also came across another, very important clue. In 2018, a team of researchers based at Columbia University’s Institute for Cancer Genetics had published an intriguing study using mice with a pair of gene mutations that, when they co-occur, predispose T cells to go rogue. (Michel’s tumor, which had been sequenced by this point, showed the same two mutations.) When these mice were injected with sheep red-blood cells—as an experimental stand-in for invading microbes—the animals developed the subtype of lymphoma that was diagnosed in Michel. Now Michel had a theory to explain [the rapid spread of his cancer].

Literally adding insult to injury, five months after his booster jab, Goldman came down with a fever and tested positive for COVID. Whether the test was reliable or not, which is a matter of debate, one thing for sure was that Goldman was now positive for the very thing he expected the jab to protect him from.

Publicize, but not too much

Goldman, together with his brother and six of his colleagues, published the study of his cancer spread, in the November 2021 edition of a journal for which Goldman himself serves as the chief editor, with the title, “Rapid Progression of Angioimmunoblastic T Cell Lymphoma Following BNT162b2 mRNA Vaccine Booster Shot: A Case Report.” Not long after, Dr. Jane Ruby displayed the above image of the spreading cancer in a video and in a Telegram post and was picked up by Natural News.

Initially the legacy media ignored the story, but, now, having gone viral, The Atlantic published comments from Goldman himself bashing the use of his case to point to the dangers of the injection. Goldman himself had published a paper in 2018, before COVID, researching websites that provided information about vaccine side effects in an effort to combat their influence: “Fake News or Weak Science? Visibility and Characterization of Antivaccine Webpages Returned by Google in Different Languages and Countries.” Goldman continued his fight against such websites in his interview with The Atlantic:

When I told Michel about these online posts, he shook his head in disappointment. “They’re looking for anything to support their crazy vision,” he said. “It makes me sad about the world in which we are living.”

Even before the paper was picked up by alternative news sites, Goldman was “obsessively” attempting to prevent just that:

He told me that he’d obsessed over getting the tone of the manuscript exactly right, so as not to fuel vaccine skepticism. He was careful, for example, to describe the vaccine as possibly “inducing” the “progression” of his cancer—rather than “causing” it to surface. “I spent hours and hours,” he said. “I’ve never spent so much time on details in a paper.”

The Atlantic, for its part, referred to side effects as rare no less than nine times in its article:

Back to Center: My daughter is worried for her friends who got the COVID shot