World tennis champion Novak Djokovic touched down in Israel last week for the Tel Aviv Watergen Open, where he won the title against Marin Čilić Sunday. The win is Djokovic’s 89th career title and his third this year after winning Wimbledon.

Aside from his record-breaking sports career Djokovic is best known for his unshakeable resolve in the face of vaccine mandates refusing the COVID-19 injections even at great expense to his career. In August, Djokovic was denied entry to the U.S. Open because of his decision, a consequence he accepted rather than bend the knee.

Israelis gathered in Tel Aviv Sunday outside the stadium to demonstrate support for Djokovic, holding signs that read, “Thank you for saying ‘My body, my choice',” and “Djokovic won. Freedom is not a crime – shot kills!” among others. 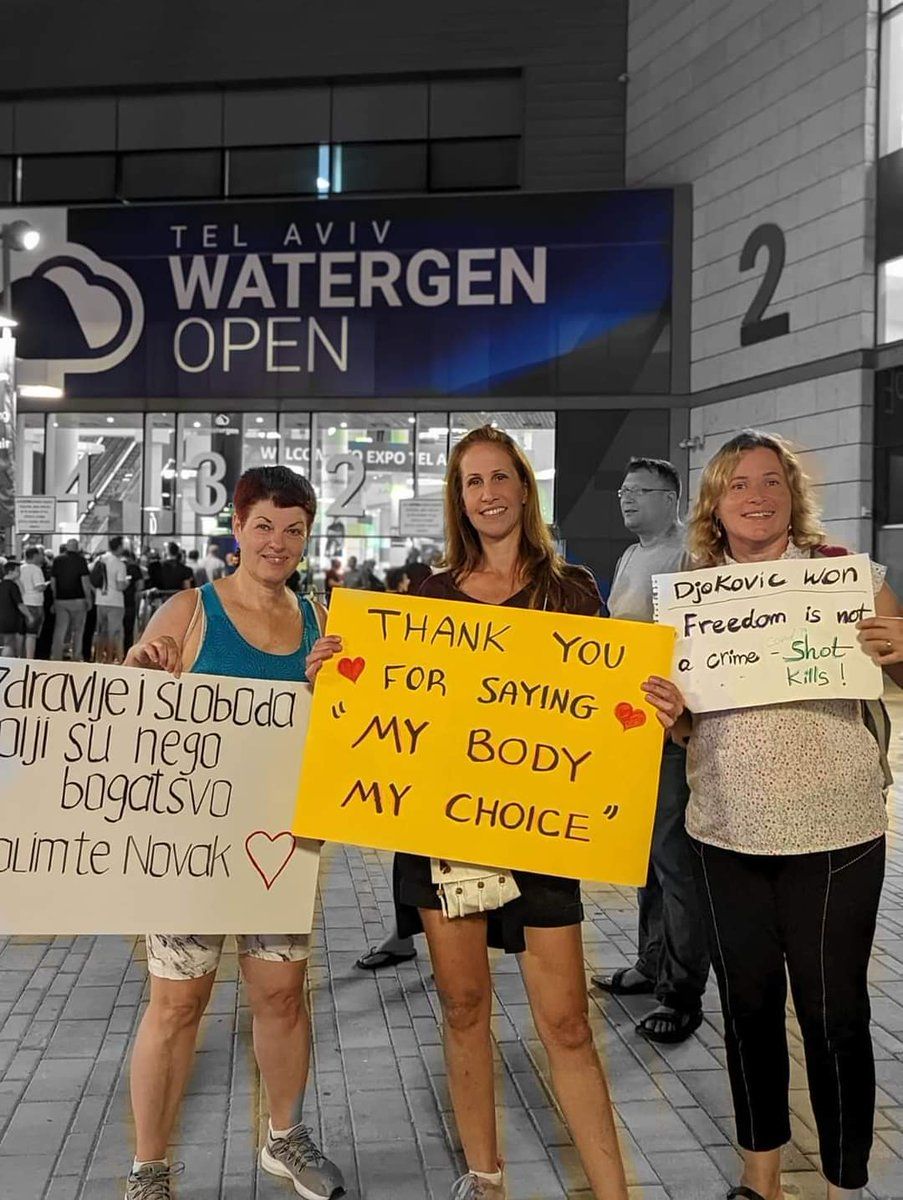 A video taken shows a crowd of Israelis shouting praises at Djokovic and calling him a hero.

“Thank you! Thank you so much!” one woman says through a megaphone, echoed by the crowd who shout “Hero! Hero!”

“Thank you for being our voice!” shouts a man.

“You’re a great example of a free man in a free world, thank you for that!” says the woman through the megaphone. “Thank you for saving your body, your health and inspiring millions around the world to do so,” she added.

Djokovic waves, and the crowd cheers wildly, hoisting their signs.

*You will not see it in the mainstream media*
Last night. Tel Aviv. The Israeli public thanks Djokovic for fighting their war against the Covid dictatorship and not injecting the covid vax.

Djokovic’s reception by Israel officials, on the other hand, was a frosty one; not one official reportedly welcomed the tennis superstar.

The reaction by Israel officials contrasts with their reception of Pfizer CEO Albert Bourla in June, who they treated to a hero’s welcome.

When Bourla arrived in Israel to receive his $1 million Genesis prize, he was banqueted by Israel’s top diplomats and officials, including President Isaac Herzog. He was serenaded by celebrity singers. Then-Prime Minister Naftali Bennett embraced Bourla and thanked the pharma exec for “the gift of life,” a sentiment not shared by many Israelis.

Bourla was also treated to a fawning interview by Channel 12’s Yonit Levy, who appeared so awestruck of the pharma mogul that she stammered throughout the conversation.

“You’re quite a walking miracle,” Levy breathlessly told Bourla during the interview, also thanking him “for everything you did.” At another point, Levy asked Bourla if it was a “bold” decision to be so selfless in manufacturing the COVID-19 vaccine.

But Bourla’s reception by Israeli citizens was quite different judging by the crowds who vehemently demonstrated against him outside the ritzy Jerusalem Theatre where he received the Genesis Prize.

The protesters booed and shouted “Shame on you! Shame on you!” and “We will not comply!” and “Here comes another criminal!” at the elite guests as they arrived at the gala in taxis and charter buses. They sang “We will never give up” throughout much of the protest. The crowd carried signs that read, “I, too, am a vaccine victim,” “Pharma = $$$$$,” “No vaccines for children,” “Bourla is a Nazi,” “Stop being silent about vaccine injuries,” “Bourla came to accept a Nobel for murdering the people” and “Burliar” under a photo of Bourla with an extended Pinocchio-like nose.