It wasn’t long before the rollout of an unprecedented program to inoculate the entire world with a newly developed and altogether different vaccine was followed by unprecedented reporting of severe side effects and deaths.

Who heard of those reports and their skyrocketing frequency? Not that many.

Soon after the COVID vaccine campaign got off the ground, legacy news outlets reported on the almost immediate expansion of censorship of science based social media posts.

Big Tech will no longer allow any questions about vaccines, even from Harvard immunologists quoting government data. [Emphases added].

The government data deemed most egregious included reports to its own Vaccine Adverse Event Reporting System (VAERS). The “crime” apparently being that the system worked too well, showing an incredible spike in both serious side effects and deaths immediately after the mRNA vaccinations began.

Total deaths following COVID vaccinations now surpass 27,750 (compared with a 2020 total of 421 deaths for all other vaccines combined). 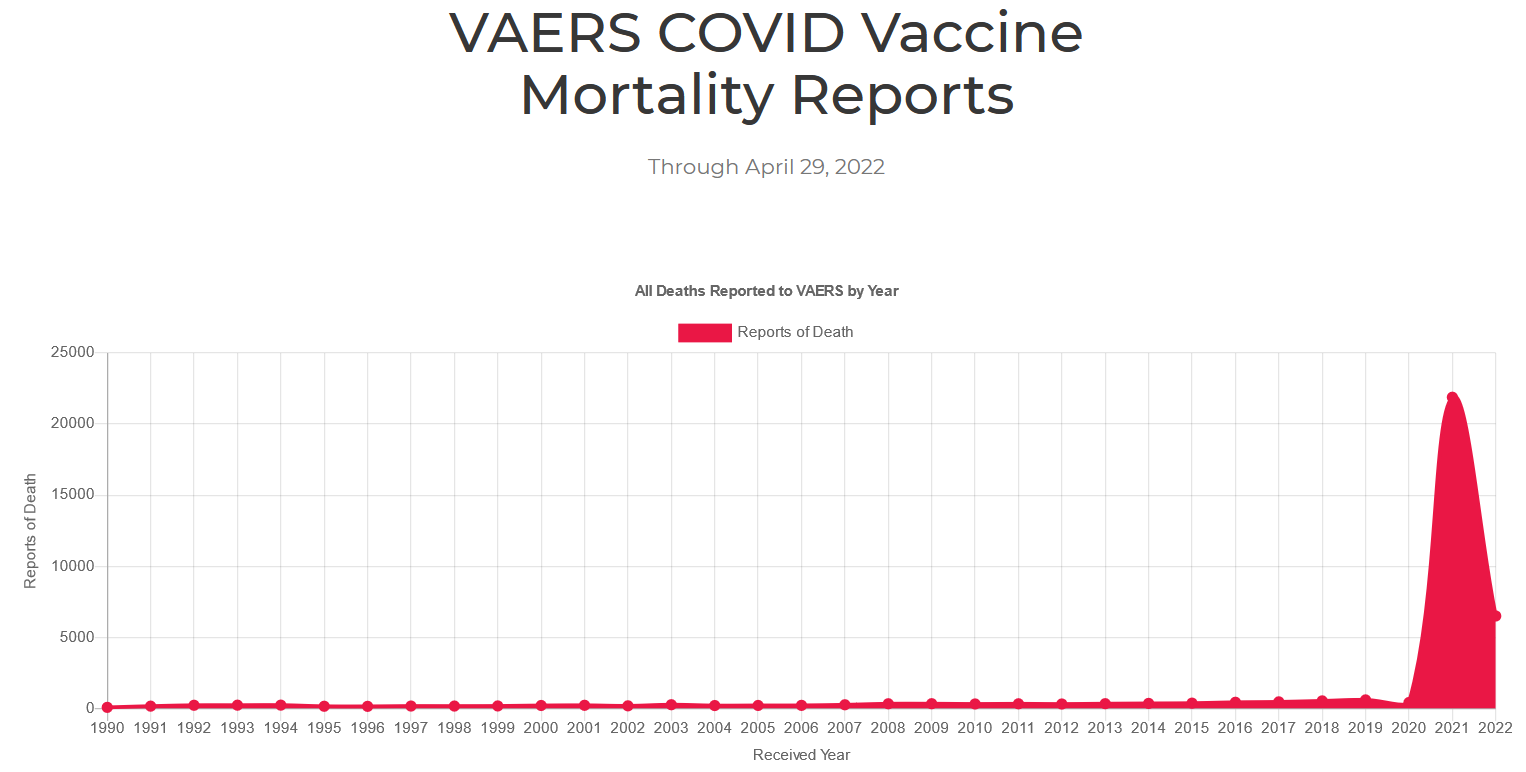 The Big Tech censorship boards echoed the responses of public health officials, insisting that the VAERS system the government  put in place to act as a “national early warning system to detect possible safety problems” was suddenly unreliable to do just that. The CDC explained,

It is important to note that VAERS is only one system among many that monitor the safety of US-licensed or authorized vaccines. [Emphasis is the CDC’s].

Factcheckers pointed out that VAERS may include deaths, “even if it’s not clear that a vaccine caused the problem.”

Ironically, the VAERS website itself expresses the opposite concern. "'Underreporting' is one of the main limitations of passive surveillance systems, including VAERS.

After all, how many people know about VAERS and, if they do, how many have been discouraged from making a connection between a health problem and a recently received vaccination when they hear a doctor or nurse say, 'It’s not the vaccine. What else happened?'

Unlike the VAERS reporting system, the National Vaccine Injury Compensation Program (VICP), administered by the Health Resources and Services Administration (HRSA), is a government program set up to pay people “found to be injured” by vaccines.

VICP is, in fact, the only way to obtain compensation for damages caused by vaccines, as the legislation enabling it shielded pharmaceutical companies from having to pay even one dollar in damage claims emanating from the use of their vaccines, claims large and frequent enough to possibly bankrupt those companies.

The VICP was established after lawsuits against vaccine manufacturers and healthcare providers threatened to cause vaccine shortages and reduce vaccination rates.

So a vaccine injured person who receives a payment from VICP after presenting their medical records, including vaccination records, has either proven their case to a judge in the U.S. Court of Federal Claims, which oversees these claims, or has presented sufficient evidence to the program administrators to justify a pre-trial settlement.

That would be enough to get their story past the “medical misinformation policy” censors, right?

As a small child, Leo Smith received two vaccine injections together, but there were actually four vaccines in them since one was the 3-in-1 Diphtheria, Tetanus, and Whooping Cough Vaccine (DTaP) shot. This was one of five DTaP shots Leo was scheduled to receive in the first few years of his life, for a total of 15 vaccinations just from DTaP.

We will never know whether Leo would have been spared neurological damage had the DTap shot, containing up to 0.85 mg aluminum, the upper limit according to federal regulations, not been combined with another aluminum containing shot.

What we do know is that aluminum is a poisonous metal:

Macrophages [which] ingested the aluminum-coated vaccine material … are capable of crossing into the brain through the unique “tight junctions” that are located between the BBB’s endothelial cells.

Most parents do not know that vaccines contain relatively large amounts of poisonous metals, or that they can enter their children's brain, or that there’s a legal mechanism for requesting compensation for injuries caused by vaccines.

Leo’s mother, for one, didn’t know.

Because there’s so little publicity about the [VICP] program, Amy Mitten-Smith, a special education consultant in San Diego, almost missed the deadline to file a claim on behalf of her now-8-year-old son, who suffered neurological damage from childhood vaccines.

When parents are taking their child in for their well-baby shots, the doctor should give them information about where they can go and who they can contact if there is an adverse reaction to the vaccine. And after asking for medical attention for the reaction, the first thing they should be told about is the court system.

In a video of a short piece done by ABC News on Leo’s injury, his mother explains that within a few hours of his two shots his skin began to turn red in the area of the shots, followed by a hive breakout and a fever a few days later, only to progress to brain seizures within weeks and then, after a few months, an inability to talk, an eye tic and eventually autism and Tourette syndrome.

Mitten-Smith summed up the effect on her and her child, “I feel constant guilt. I thought I was protecting him by taking him in to get his vaccines, and I ended up injuring him for the rest of his life.”

Mitten-Smith decided to go public when she witnessed the backlash against unvaccinated children during media coverage of a measles outbreak. Intending to let the wider public know that vaccination is more complicated than they may imagine, she appeared in the ABC news clip, which made clear that the court ruled that the vaccines injured her child, awarding her $55,000, in what would have been a far greater verdict had it been a normal product liability claim against a manufacturer and not forced into an administrative proceeding with the government.

Now posted on Rumble, the ABC news clip was originally posted on YouTube until yesterday when the Google subsidiary banned it, without any further explanation, for allegedly violating their medical misinformation policy. And just like that, the mother of a once healthy child who is now tending to his needs as a boy with autism and other neurological damage, is unseen.

It’s OK when we do it

In contrast to the removal of this video, when pro-vaccination channels such as the government post facts that could lead to vaccine refusal, YouTube leaves the videos up, even when a specific complaint is made to them pointing out the violations of their policies, as was reported in, “AFLDS submits complaint to YouTube after CDC video suggests COVID shot carries heart inflammation risk”.

And, interestingly, a longer version of the same video still appears on the YouTube channel of ABC News 10. Perhaps YouTube liked the longer version’s inclusion of a statement that the court did not specify autism as part of the damage caused by the vaccines. Or perhaps YouTube doesn’t vet videos on legacy media channels. Or perhaps they simply didn’t notice yet. They didn’t say.

Vaccine Injury: A mother's Journey to Compassion and Compensation, a real life chronicle of how a mother's dream for a better life was turned upside down when her youngest daughter suffers a one-in-a-million severe adverse reaction to the MMR vaccine. Life is never again the same.”

How long will that last?

Cuban immigrant mother loved US freedom until hospital took it away; ‘They’re starving me!’

The Ugly Face of Hatred with Dr. Josh Guetzkow (Part I)