An extraordinary expose on Joey Gilbert has uncovered a shadowy group usurping the GOP’s elephant logo and using a misleading name.

Earlier this year Nevada residents were suddenly bombarded by “tons of online ads” pushing Joey Gilbert for governor of Nevada. Network in Vegas reported that the online ads, as well as radio ads and Gilbert’s campaign website, were paid for by a “democrat front group … to cause chaos in the Republican Primaries.” The group is registered as a PAC (political action committee) with a name giving no hint to its Democrat affiliation.

The Democrat group, posing as a conservative pact, is called the Patriot Freedom Fund.

The decision to self-identify with the terms “Patriot” and “Freedom” notwithstanding, an investigation by The Nevada Independent revealed that the political affiliations of the Fund’s leadership are far from what one would normally associate with patriots and freedom fighters.

The PAC’s listed officer is Truman Fleming, a Las Vegas-based real estate agent previously married to Assemblywoman Sandra Jauregui (D-Las Vegas) ... who has become one of the Legislature’s most prominent gun control advocates.

At the time of that expose, in May 2022, no other public information was available about the Patriot Freedom Fund. It had only been formed that same month, a political maneuver allowing the group to conceal its funding sources until well after the election.

it has no online presence …. Patriot Freedom Fund was registered with the secretary of state’s office on May 6, which means it won’t have to reveal contributions or spending until nearly a month after the primary election on June 14.

The Patriot Freedom Fund did not just employ a deceptive name. Less than two weeks after the expose was published, the Republican National Committee sent a cease and desist letter to the PAC, accusing it of “meddling in the Republican gubernatorial primary.”

RNC attorneys included a copy of a “misleading and fraudulent campaign mailer” titled “Republican Primary Ballot Guide” instructing the recipient to “take this sample ballot with you when you vote.” The other page mimics the design of a sample ballot, with filled-in boxes for … “Anyone but Joe Lombardo” for governor.

“Patriot Freedom Fund’s unauthorized use of the RNC’s logo is particularly disturbing, as it is clearly intended to interfere with Nevada’s Republican primary elections as voting begins this weekend,” the letter states.[Emphases added]. 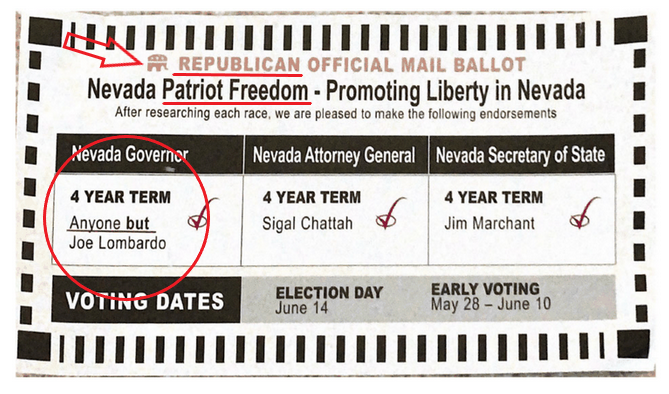 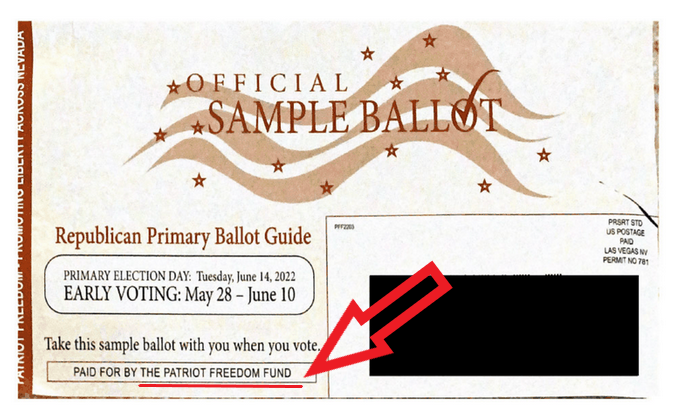 The “Anyone but Joe Lombardo” flier benefited Gilbert by specifically attacking his opponent in the primary election, Sheriff Lombardo.

In addition to the cease and desist letter to the Democrat front group, the Nevada Republican Party Chairman warned voters of the deception.

We have received reports that Republican voters across the state have received deceptive mailers about Sheriff Joe Lombardo sent out by a Political Action Committee run by the husband of Democrat Assemblywoman Sandra Jauregui.

These mailers prove once and for all that Democrats are up to sleazy, shady stunts to sow chaos in our Republican primary.

Check back as we continue our series on Gilbert and look at these questions:

Joey Gilbert linked to fraudulent ‘Protocols of Elders of Zion’